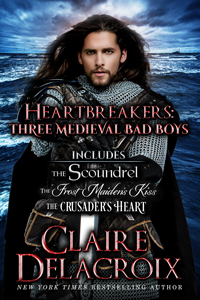 Do you love dangerous heroes? Heartbreakers: Three Medieval Bad Boys brings you three wicked heroes of ill-repute – and the women who dare to love them.

In The Scoundrel, Evangeline is determined to recover her family’s relic from the thief Gawain. She knows he’s a charming trickster with no moral code and has vowed to play by his rules to regain the prize, never expecting that Gawain will steal her heart. Gawain is intrigued by the first lady who is his match—when he falls in love with Evangeline, will he be able to convince her that his sweet confession isn’t just another ruse?

In The Frost Maiden’s Kiss, Catriona arrives pregnant at notorious Ravensmuir, home of the Hellhound, a mercenary of dangerous repute. The last person she expects to save her child is this grim and fearless man, and she knows herself to be in his debt. When Malcolm suggests a marriage of convenience to give her son a future, Catriona knows the only way to repay the Hellhound is to save him from the curse placed upon him, whatever the cost to herself.

In The Crusader’s Heart, Christina takes a chance on Wulfe, challenging the Templar to aid her in escaping her captivity in a brothel in Venice. She will do anything to convince him that he has need of her by his side as Wulfe is the key to her safe return home. Wulfe finds himself dangerously tempted by the beautiful and resolute Christina, to the point of discarding his vows. He has nothing to offer her in his own right, but Christina’s optimism is infectious and he revisits his own past, in the hope of building a future with her.

Three bold women each dare to challenge and to love a disreputable rogue, tempting the heartbreakers to change their ways. Love does conquer all in Heartbreakers: Three Medieval Bad Boys!

Heartbreakers is currently enrolled in KDP Select and available exclusively at Amazon
• Amazon.com