Harlequin Historicals published my first eleven medieval romances. These books are all out of print, although you might be able to find old mass market copies at used bookstores or online. The rights to these books have all reverted to me and some of them are being republished. There were links between various books (like common characters) in their original editions, although they were never branded as series by the publisher. In most cases, the connections weren’t strong enough for the books to be considered a linked series. In many cases, I’m changing that in the new editions.

This is a gallery of the original editions, with notes on any new editions.

Romance of the Rose
My first book in print, and my first cover — by Judy York, who ultimately painted many of my Harlequin covers.

His Most Precious Flower…

Armand d’Avigny would always associate Alexandria de Fontaine with the smell of roses. Indeed, the knight had carried the memory of the beautiful healer with him to the Crusades. Now, as he looked upon that same sweet face once more, he vowed that never again would she be taken from his side.

Alex’s heart soared when she recognized the green-eyed gaze of her would-be rescuer. Yet even as they sped to safety, she knew that she could not accept the promise of Armand’s love. For to do so would expose him to the danger of her enemy. And as long as Pierre de Villiers remained alive, Alex de Fontaine would never be free.

“Delacroix takes us on a crusade we won’t soon forget!”
—The Medieval Chronicle

The Sorceress
I love this cover. I believe it was also painted by Judy York. This book has the distinction of having the hero’s name spelled incorrectly on the cover, a discovery made when it was too late to change either the type on the cover or that inside the book. Gah. I spelled it correctly here, just because.

A passion ruled by fate…

Out of the mists of deep dreaming stepped Hugues de Pontesse, a bold and brawny knight. Yet, by the arcane power burning in her breast, Sophie Mauclerc knew this warrior was more than fantasy come alive. He was her destiny.

With her captivating violet gaze and talk of predestined love, Sophie was truly a bewitching creature. Hugues suspects that the woman is half-mad – but what a fine and passionate madness indeed!

“A beautiful fantasy romance that pulls the reader into its spell!”—Affaire de Coeur

What could a nobleman want with a woman of her station?

A cloth merchant’s daughter, Adela lived a life of responsibility. Little color was there to the fabric of her dreams until the day an impudent knight with mischief in his eyes began to untangle the threads of her resistance…

A man of principle, Roarke d’Aalgen had bargained to retain his family honor. But he had not counted on the lovely Adela, a woman who scoffed at his seduction and fired his desire to the boiling point!

Honeyed Lies
This cover was the first one done for Harlequin Historicals which was a manipulated photograph, instead of a fully painted image. The artist was Jon Paul.

Sable-soft eyes set in a rugged, chiseled face marked the merchant Jacob as a man of vibrant contrasts. Instantly, Rebecca knew here was a man unafraid of passion. One who made her achingly aware of her own desires and ashamed of the deceit she had woven to survive.

With her ebony hair and a look that danced with defiance, Rebecca could bewitch any man. Jacob had never expected to uncover such a treasure buried beneath widow’s weeds. Nor find himself longing for something deeper than desire. And all for a woman surrounded by secrets that imperiled their very lives! 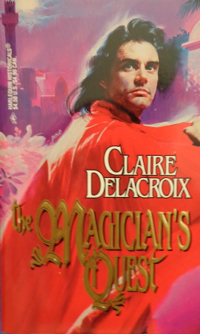 My very first cover illustration by Pino, who was very famous by this point in time. I just love this cover. This was my first shape shifter romance – of course, I had to set it in medieval Morocco.

Heir to an ancient legacy, Yusuf was a breed apart. Yet though his soul held the aura of kings, he fought against the savage stirrings in his blood, until the fate of a dancing girl entwined with his own, and released the timeless power of love…

Driven by desperation, Alifa did what was necessary for the survival of her younger siblings, knowing that her own life held little promise. Until the night that tied her forever to Yusuf, a man whose touch could mean fearsome death – or a life of magical passion.

“Dark and dangerous…THE MAGICIAN’S QUEST will hook you from the very beginning… Magic!”
—Affaire de Coeur 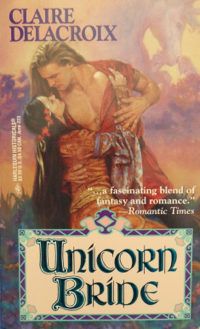 This book was actually my second sale to Harlequin, although it was published third. At the time, Harlequin Historicals were launching a line of “big books”, which were historical romances that had broader scope and were more like single title historical romances. This cover illustration was again done by Judy York, and the male model is one of three brothers who were very popular around that time. Notice that there’s a unicorn rampant in the background of each of the covers in this trilogy.

For generations, legend had stalked the battlements of the fortress Montsalvat. And now Alienor de Perpignan found herself promised in marriage to the man at the heart of the oft-whispered tales: Dagobert, Count de Pereille. A near-mythic being rumored to be a beast by day – and more than a man by night.

That Alienor was his true-destined bride, Dagobert de Pereille had no doubt. Indeed, with her exotic beauty and blade-bright spirit, she could be none other. But could he who bore the mark – and the curse – of ancient kings ever trust her enough to open his heart?

Unicorn Bride has been updated and republished in a new edition. 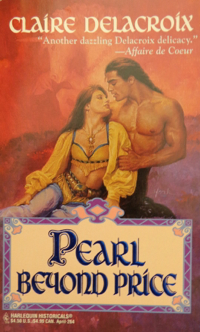 Another cover illustration by Judy York. I love the rich colours of this one.

Black Wind, the Mongols hailed him. Swift, fierce and proud. Yet Kira looked upon Thierry de Pereille and saw, not a man marked by legend, but a warrior who had taken her from the life she knew…to a place of passion beyond her wildest dreams.

The woman was a witch. Truly, who else could make pearls drop from her mouth? Or ensnare a man with nothing more than a touch? Yet, even as he fought the power that bound them together, Thierry knew he could not deny that the gentle Kira was his destiny.

“A talented author medieval romance fans are proud to call their own.”
—The Medieval Chronicle

Pearl Beyond Price will be published in a new edition in December 2019.

Drawn together by destiny…

Genevieve de Pereille’s music echoed in the hollows of Wolfram’s heart, pulling him into an unfamiliar world where his knightly vows faded to a distant murmur. The secret heir to an ancient legacy, she held him fast with the timeless power of love.

With silver hair and fierce pale eyes, Wolfram stirred something raw yet beautiful deep inside Genevieve’s very begin. Yet the handsome warrior was responsible for her brother’s death, and she swore he would never escape her righteous vengeance!

“An irresistible romance – you won’t be disappointed!”
The Medieval Chronicle 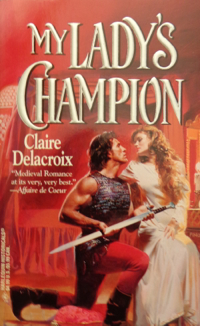 My Lady’s Champion
Another beautiful cover illustration by Judy York…

She swore never to welcome him to her bed…
Yet when Lady Melissande looked upon the rugged face and form of the knight she’d been forced to marry, her resolve melted.

For Quinn de Sayerne stirred her in the most unexpected ways, and therein lay the danger—for succumbing to desire meant losing everything she held so dear!

“A vibrant portrait of a magical era. Beautifully written – a definite winner!”
—The Literary Times

This book has been revised and republished as One Knight’s Return.

Enchanted
My second Pino cover illustration, and it’s another beauty. I always wondered if it was the same red cloak…This is my second shape shifter romance, and one with more of a fairy tale tone.

Dangerous Magic Tainted the Air…
Cursed to spend his days as a wolf, at night Rolfe de Viandin was under a different enchantment. One woven by the beauteous Annelise de Sayerne – the woman fated to be his doom, and his salvation…

Vowing to marry solely for love seemed to Annelise the only way to escape her family’s legacy of violence. Yet now she was oath-bound to the mysterious Rolfe de Viandin, a man who denied her

his trust…though he’d managed to capture her heart.

Enchanted has been revised and republished as One Knight Enchanted.

She’d only herself to offer, but Gabrielle de Perricault hoped ’twas enough to entice the courageous Yves de Sant-Roux to champion her cause. Though should he pledge his sword to her, a greater danger awaited, for this knight could easily breach the wall that surrounded her heart…

Sworn to escape the taint of his birth by the valor of his deeds, Yves de Sant-Roux forsook any binding ties. Then Gabrielle de Perricault, a lady of rare sense and subtle beauty, promised something he’d never wanted, yet found he couldn’t resist—a home, a family, and her.

“Truly a feast for the reader!”—Rendezvous

This book will be revised and republished as part of the Rogues & Angels series. It will have a new title.