Robbed of his possessions, wounded and left for dead, Quentin de Montgomerie has lost everything except his love for Mhairi, the daughter of the Hawk of Inverfyre—and he knows who is to blame for his fate. He vows to return to Inverfyre and take his vengeance from the Hawk, but arrives to discover that the fierce maiden in possession of his heart has blossomed into a beauty, and that her kiss has the power to give him hope for the future again. Can Quentin prove himself to the Hawk and win Mhairi—or will she spurn him for being less than once he was?

The Mercenary’s Bride is a Christmas Scottish medieval romance novella which was originally published in the Christmas 2017 anthology The Nutcracker Reimagined. 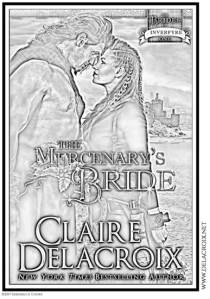 Download The Mercenary’s Bride page to print and colour!

An excerpt from The Mercenary’s Bride:

The sun was hot enough to burn, even early in the season, and Quentin was so parched that he could not recall the feel of water in his mouth. All the same, he did not rise from the road. He remained where he had been abandoned—beaten, robbed, and bleeding—and watched the carrion birds circle overhead. They were dark against the brilliant blue of the sky. The road was empty in either direction. There was no sound but the wind and the calls of the birds that soon would make a meal of him.

He did not know how many of his bones were broken or how much blood he had shed. Both counts must have been considerable, given how shattered he felt and how many assailants had attacked him. Whether his right eye was merely swollen or more damaged than that, he did not know. His magnificent destrier was gone, along with its trap, his armor, his sword, his money, his food, his water. He literally had the shirt on his back and no more.

He had lost everything, but worse, he had no hope. Quentin did not have it within him to fight any longer. Who would care if he died?

He would never return to England, much less Scotland.

He would never reach Seville.

He would never prove himself to the Hawk of Inverfyre. Anger rose within him at the memory of their final exchange and fury kindled within Quentin. What was his crime? He had loved the Hawk’s daughter, Mhairi, loved her for her ferocity and passion—and her determination to learn the arts of war. He had tutored her, openly at first and then in secret, believing his liege lord was wrong to keep his daughter from the knowledge she yearned to possess.

In truth, Quentin could not deny Mhairi. He would do any deed for her. He had ridden south and spent seven years as a mercenary, earning a fortune so that he could return and request the honor of her hand in marriage.

He would not have lost Mhairi forever.

The birds cried to their fellows as they dipped lower but Quentin gritted his teeth. He was not dead yet, and as God was his witness, he would see Mhairi one last time.

He had made her a promise that was yet unfulfilled.

And he would have his vengeance upon the Hawk, if it was the last deed he did.

Excerpt from The Mercenary’s Bride
Copyright 2017 Deborah A. Cooke