Be swept away by the classic fairy tale medieval romance trilogy by the “Queen of Medieval Romance”! Three brothers set out on a Bride Quest at the behest of Princess Brianna and each find love of legendary power…

In The Princess, Brianna challenges three knights to compete for her hand, declaring that she will marry the one who brings her a gift that makes her laugh. She hopes to avoid the king’s dictate and marry for love, but Luc has no interest in surrendering to a beauty’s whim. He has abandoned his life as a knight and put down his sword forever—or so he thinks, until Brianna tempts him to fight for her love.

In The Damsel, Burke returns to Ireland in the hope of claiming the hand of Alys, the beauty who haunts his dreams. Consigned to the custody of her cruel relatives, Alys has lost hope in any happiness, but Burke lays siege to her assumptions with resolve, restoring both her faith and her love. But when the secrets of the past threaten the couple’s future, will their love be enough to defend them?

In The Heiress, Rowan takes his brothers’ challenge and vows to win the hand of the richest heiress in Ireland. There is no place for love in this charming rogue’s heart—until he finds himself buying a beautiful slave girl, one who provokes him into reconsidering all he knows to be true, and daring him to win her heart, if he can.

This digital bundle includes The Princess, The Damsel, and The Heiress. 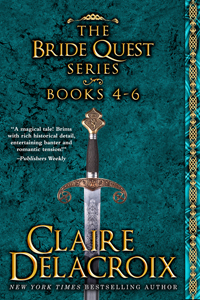 Three fairy tale medieval Scottish romances in one digital bundle, from the “Queen of Medieval Romance”!

In The Countess, Eglantine flees to a remote Scottish holding, in order to give her daughters the chance to marry for love, only to find an alluring highlander insisting Kinbeath is his possession. Duncan suggests a handfast, intending to win the heart of the alluring noblewoman during that year and a day, but Eglantine is determined to resist him, at all costs.

In The Beauty, Jacqueline chooses to join a convent instead of marry, only to be abducted by a scarred crusader intent upon avenging himself upon Duncan. Little does Angus realize that he has seized the wrong maiden, much less that she will help him to reclaim his stolen estate and claim his wounded heart as well.

In The Temptress, Esmeraude challenges those knights seeking her hand to a bride quest, intending to wed only the most worthy of the contenders. Bayard’s ambitions are bound to his success, and he is not a knight whose heart is available to be claimed – but Esmeraude will accept no less than his all.

This digital bundle includes The Countess, The Beauty, and The Temptress.