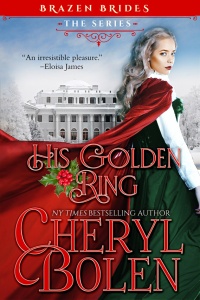 Lady Fiona Hollingsworth never thinks of herself as particularly daring – until she learns that her beloved brother needs her help. But when Fiona approaches the powerful and enigmatic Nicholas Birmingham with a scheme in mind, she is taking a far bigger risk than she knows. For Fiona’s exchanging more than vows; she’s striking a delicious bargain with the devil himself – and Christmas provides more than enough opportunity for wicked mischief under the mistletoe…

Nicholas Birmingham hasn’t become the richest stockbroker in England by being anything less than shrewd. He fully understands what’s behind Fiona’s brazen proposal, yet he cannot turn away the alluring lady who’s haunted his fantasies for so long. Of course, a man has his pride, and Nicholas has no intention of revealing how he feels. Yet from the moment he slips his ring on Fiona’s finger, desire and chaos are kindled. Now it’s only a matter of time before the magic of the Season brings true love to light!