Unicorn Bride was the second book I sold to Harlequin Historicals and it was originally published in June 1994. The cover on the right is the original mass market edition, with a cover painted by Judy York. I loved this book, which is set in what is now southern France, and was very pleased to discover that I still love it just as much as I did almost thirty years ago.

So, I’m very excited to be preparing this book for republication in a new edition. There are a few changes, but no so many that I think this version merits a new title. It’ll be published in August, and is available for pre-order now. The new cover is by Dar Albert and I love it to pieces. 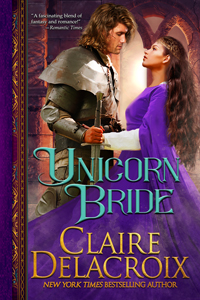 For generations, legend had stalked the battlements of the fortress Montsalvat. And now Alienor de Perpignan found herself promised in marriage to the man at the heart of the oft-whispered tales: Dagobert, Count de Pereille. A near-mythic being rumored to be a beast by day – and more than a man by night.

That Alienor was his true-destined bride, Dagobert de Pereille had no doubt. Indeed, with her exotic beauty and blade-bright spirit, she could be none other. But could he who bore the mark – and the curse – of ancient kings ever trust her enough to open his heart?