I have a fascination with quinces and was very happy this year to acquire two quince trees for my garden. They’re very young, and just sticks at this point, but I’ll pamper them and hope for a harvest in a decade or so. It might just be one or two quinces, but they’ll be worth the wait.

You’ll notice from the picture above that the fruit is pale yellow. It’s paler inside and granular like a pear. Quinces are also as hard as rocks, even when ripe. They have to be cooked to be eaten. The scent is between a pear and an apple, but when quince is cooked, it turns pink and develops a kind of pineapple flavor. The flavor is distinct, both familiar and exotic. I think the way it turns pink is just magical.

Quinces have been known for millennia. They originated in the Middle East and spread early to Europe. Some scholars believe that the golden apples of the Hesperides were quinces, and that the apple given by Helen of Troy to Paris was actually a quince.

The Romans mentioned quinces often in their literature. Pliny said it warded off the evil eye. Plutarch documented the ceremony of a newly married couple sharing a quince: since the quince was sacred to Venus, this was to ensure a sweet future together.

Quinces were included in the list of plants by Charlemagne (Capitulare de Villis) that should be grown on imperial estates.They were also planted at the Tower of London in 1275. In Old English, the fruit was called a coyne, which has evolved to the modern quince. Here’s an article by the Metropolitan Museum about the quinces that grow in the Cloisters Museum.

Both of these medieval illustrations come from volumes that mention the benefits of quince upon the digestive system and its use in whetting the appetite.

What good are quinces? They are high in pectin and Vitamin C and make a lovely pink jelly. They have that marvelous flavor. This post of a medieval menu includes a recipe for quince cake. As mentioned, they have long been believed to aid in digestive issues. When Magellan undertook his voyage to the Pacific, they carried quince jelly for the officers, not realizing that the Vitamin C in it would ward off scurvy.

We planted our two quince trees this past weekend and I’m very excited to watch them grow.

This is a post that’s been on my main blog since 2008. I thought that since it’s medieval cooking, I’d move it over here and start a new category for similar posts. This tart is just so good – and it looks good, too. Medieval food was about presentation as well as taste, and you could pipe this into a great hall with pride. 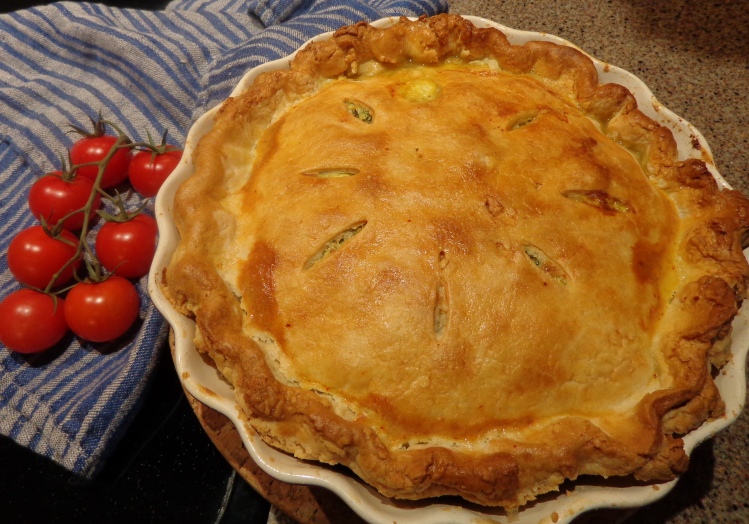 The recipe is from a book called THE MEDIEVAL KITCHEN: Recipes from France and Italy, by Odile Redon, Françoise Sabban and Silvano Serventi. Essentially, they went through medieval manuscripts in search of recipes. (It’s available only in print. Here’s an Amazon link.) The recipes are presented in their initial form, then modernized, the way we’re used to seeing recipes written.

This is the Torta Bolognese or Herbed Swiss Chard and Cheese Pie. (page 141)

Just in case you don’t have the book at hand, here’s the excerpted modern version of the recipe.

Prepare the pastry (okay, I shortened that. If you make pastry, you have a recipe already. Just do what you do.) and refrigerate.

Grate or mash the cheese. Trim and wash the greens and herbs. Chop them finely in a food processor, then add the cheese and process until you have a smooth green mixture, scraping down the sides of the bowl as needed. Beat the whole eggs and blend them into the mixture. Add salt to taste, and plenty of freshly ground pepper. Crush 3 or 4 threads of saffron between your fingers and add them to the mixture along with the softened butter. Process until thoroughly blended. Roll out about 2/3 of the dough and line a deep 9″ tart pan.  Add the filling, roll out the remaining pastry, and cover the pie, pressing the seams tightly shut. Set the tart pan on a baking sheet to catch any drips, and put in the oven. Crush a few threads of saffron between your fingers and add them to the egg yolk; beat well to blend and leave to infuse. When the pie has baked for 15 minutes, remove from the oven and paint the top crush with the egg yolk and saffron mixture. Return to the oven and bake for another 45 minutes to an hour.

Now, if you’re wondering what raclette or tomme cheese 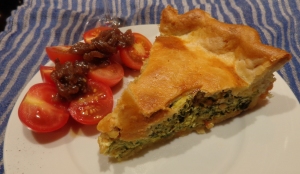 is, you’re not alone. I’ve eaten raclette and it’s yummy, but had no idea what kind of cheese to buy. I use the better part of a 16 oz tub of ricotta, as well as some other fragrant cheese grated, like Oka. I also add some chopped sun-dried tomatoes to the mixture and some sliced black olives. I don’t use a food processor – I just coarsely chop the Swiss chard leaves. We have teeth to chew our food and “a smooth green mixture” doesn’t sound that appealing to me.  With my changes, this is a fabulous tart that looks beautiful, too. Mr. C. makes his tomato salad to serve with it, the one with the carmelized onions and balsamic viniagrette, and neither one of us minds re-runs the next night.

What’s interesting – a note for you Swiss chard skeptics – is that it doesn’t taste much like chard. I used the same combination of ingredients in a quiche with no topping and the chard taste was very strong. This gets raves all around, though, so it’s how I’ll be using up the chard frozen from last summer’s garden. You could also substitute spinach for the chard, but you wouldn’t get the chewy bits from the chard stems.

Go on. You know you want to make one.