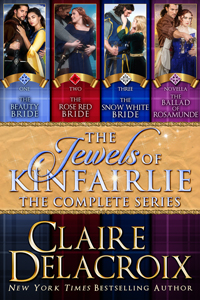 Kobo has a 40% off boxed sets sale right now, supported in the US, Canada, UK, Australia and New Zealand.

You’ll find four of my bundles included in the sale: The Jewels of Kinfairlie Boxed Set, the Bride Quest I Boxed Set, Dragonfire Quest and The Coxwells Boxed Set.

The sale runs through August 26.

To shop the sale, visit the landing page at KOBO, put the books in your cart and use the code AUGSALE at check-out.

My boxed set, All’s Fair in Love and War: Four Enemies-to-Lovers Medieval Romances, is on sale for 99¢ through May 1! 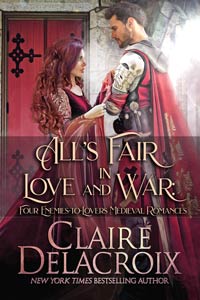 Be swept away by four thrilling medieval romances by the “Queen of Medieval Romance”, each featuring a defiant lady at odds with a persistent and powerful knight. Sparks fly in these battles of wills, but passion will win the day.

In One Knight’s Return, Melissande is compelled by her overlord to marry a rough knight just home from crusade – the alternative is to surrender her family holding completely. She knows the kind of knight who will hold her heart, and Quinn de Sayerne isn’t it. Quinn, on the other hand, knows what it’s like to risk everything and is determined to make their arranged marriage into a real one—no matter what the cost to his beautiful wife’s pride. 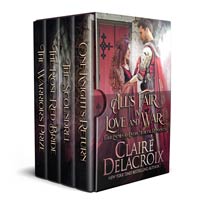 In The Scoundrel, Evangeline will do anything to retrieve the relic stolen from the chapel in her family holding, even seduce the thief himself to capture the prize. Gawain has always lived outside the law, a charming rebel protecting his own advantage, but Evangeline’s devotion to Inverfyre makes him question is choices. If he changed his ways, could this beguiling, brilliant, maddening woman come to love him?

In The Rose Red Bride, Erik abducts Vivienne to avenge himself against his wicked brother. Fueled by anger, he expects little of his captive except a son—but Vivienne is precisely the woman to take Erik’s cause once she learns his story. If Vivienne can ensure that Erik’s stolen legacy is regained, will her embittered but honorable husband find room in his heart for her?

In The Warrior’s Prize, Elizabeth challenges Rafael to change his ways, skeptical that the mercenary who nearly cost her brother his life is capable of redemption. But Rafael sees his comrade’s sister as an angel sent to save him, and when he realizes that she’s in peril of being claimed by the Fae king himself, Rafael will pay any price to save the only maiden bold enough to challenge him. But will his all be enough for Elizabeth?

All’s Fair in Love and War is currently enrolled in KDP Select and available exclusively at Amazon
• Amazon.com
• Books2Read Universal Link (for other Amazon stores.)

This collection will not be available in print.

KOBO is having a boxed set sale through April 1. You can save 40% on selected boxed sets! 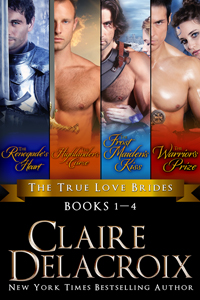 Here’s the landing page at KOBO – remember to use the promo code MARBOX at checkout to save! 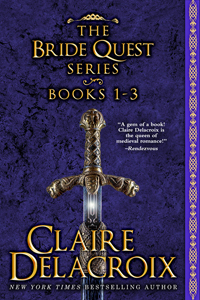 Kobo is having a 40% off sale through February 24. You’ll find the Bride Quest I Boxed Set included in the sale.

This is one of their sales that requires a promotion code at check-out to get the discount. The code is FEBSALE

Kobo has a boxed set sale running this week, from September 25 through September 30. You can save 40% on selected boxed sets by using the code at check-out. You’ll find three of my medieval romance bundles included in the sale: Highland Heroes, Kinfairlie Knights and the Jewels of Kinfairlie Boxed Set.

The landing page for the promotion is right here. Happy shopping! 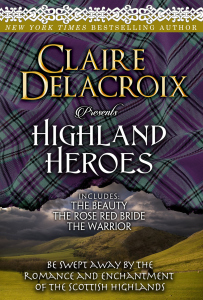 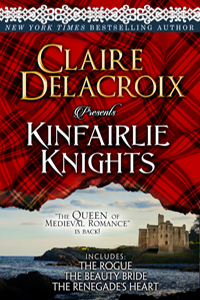