Do you get excited by the possibilities at the start of a new year? I do!

2019 is particularly exciting since a number of my series have been completed or are coming to an end. It’ll be a year for fresh starts, and I love diving into new projects and worlds. Let’s talk about one of those series today: Rogues & Angels.

Last year, I published One Knight Enchanted, which was a revision of a story originally published under the title Enchanted. I always loved this story, which is a Beauty and the Beast tale, because Annelise and Rolfe seemed to be so very good together. At the beginning of the book, he’s cursed to be a wolf half of the time, and only true love can break the spell. Rolfe doesn’t believe in love, so he doesn’t think he’ll ever be released—until Annelise comes along. The threat to her reminds Rolfe of the knight he used to be and he defends her, which begins their unexpected courtship. He hasn’t counted on Annelise’s belief in the power of love or her determination to solve every riddle—and neither of them realize that a thwarted suitor will follow her and threaten their future.

I remembered the story very vividly, but when I dug into the book file, I realized that my writing had developed quite a lot in the past twenty years. Instead of just correcting the scanned book file, I ended up revising the story, rewriting passages and adding new scenes. I delved deeper into the characters of both Rolfe and Annelise, and their relationship developed more dimension as a result. If you read Enchanted back in the day, you’ll find that One Knight Enchanted is similar but different. I think it’s better.

The story, Enchanted, had been the middle book in what I considered to be a trilogy, the Sayerne Series. It was never labelled as such by the original publisher, so for republication, I switched things around and created a new series with tighter links between the books. Rogues & Angels features eight knights and comrades returning home from crusade, each of whom is given a gift by their host before departure. You can read that scene here on the website and it’s the prologue of One Knight Enchanted.

My Lady’s Champion was the first Sayerne book published and again, I always liked this battle of wills. Quinn returns to reclaim his family holding of Sayerne, summoned by his overlord, the Lord de Tulley, upon the death of his father. Quinn was estranged from his father and has been gone for fifteen years. He’s surprised to learn that Tulley wants him to marry Melissande, the only daughter of the neighboring estate of Annossy, but willing to do whatever is necessary to regain his family holding. Melissande, however, battled long against Quinn’s father, who schemed to join their two holdings at any price, and believes the son will complete what the father began. She doesn’t want to marry Quinn and hates that she has no choice—she also distrusts that Quinn can tempt her passion to rise so easily and fears his intentions. I chose this story to be book two of Rogues & Angels and will publish it as One Knight’s Return. Annelise, the heroine in One Knight Enchanted, is the sister of Quinn, the hero of One Knight’s Return.

Again, I remembered the story, and again, I’m doing a lot more revising and rewriting than I’d anticipated. The pacing in the original was slower than I like now, and there are a lot of exclamation marks that were cut, too. I love the fire between these two, so it’s work worth doing. I’m enjoying the deepening of their characters and their conflict. The war of wills between Quinn’s companion, Bayard, and Melissande’s maid, Berthe, remains in this new version, but also, the other knights arrive at Sayerne as arranged.

The Lord de Tulley has a niece now, and that charming rogue Niall MacGillivray glimpses his future in the heiress of Tulley. Niall and Heloise’s story will be an all-new book, coming later this year.

I see this as a series of at least eight books. The year is 1102, and this company of knights is returning home after the first crusade. We began in Jerusalem and are now in the Kingdom of Arles (part of the Holy Roman Empire, in the vicinity of Sion in modern Switzerland). Niall and Heliose’s book will take place here, too. The series then will continue to France, England and Scotland. In the coming weeks, I’ll post some more about my research for this series. I’ve started to work on Pinterest boards for this series, which you can see here.

I’ll also be creating a free guided tour of the books in this world and you can sign up now: sign up for the Rogues & Angels tour.

I’ll share the links for pre-ordering One Knight’s Return soon. 🙂

I haven’t forgotten about The Stolen Bride or A Baron for All Seasons, but I’d like to write Niall’s book first. Stay tuned for more news about those books. 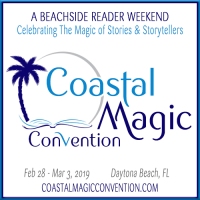 February 28 – March 3, 2019
I’ll be attending the Coastal Magic Convention in Daytona Beach, Florida. Reader registration is now open, and there will be a booksigning open to the public.

I’ll have a pre-order form available closer to the date.

There will be a booksigning open to the public on the afternoon of August 3. I’ll have a pre-order form available in the spring.