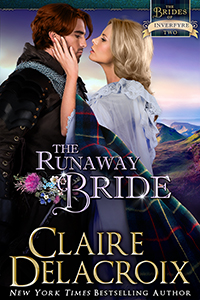 The Runaway Bride, book #2 of my Brides of Inverfyre series of medieval Scottish romances, is available for pre-order!

Aoife MacArthur is a beauty and a prize, an heiress who wants to marry for love—but her father has arranged her marriage to Nigel Armstrong, the oldest son and heir of the Hawk of Inverfyre. One look confirms that Nigel will never possess her heart—although his cousin, Ross of Kinfairlie, is another matter. Aoife knows she cannot escape her fate, but yearns for one last adventure: she will flee Inverfyre and hope that Ross will be sent in pursuit. She tells herself that one kiss will be sufficient…

Ross Lammergeier is a mercenary with a blade for hire, for he has not the coin to claim a bride. When his cousin’s betrothed flees, he lends chase, for the Hawk of Inverfyre trained him. Ross suspects that Nigel’s betrothed plays a game, but Aoife’s ploy is dangerous—for the treacherous MacLaren clan, always seeking to undermine Inverfyre, take her captive. In the course of rescuing Aoife and ensuring her safety, Ross finds himself captivated by the fierce and beautiful maiden. When they both surrender to temptation, their futures are changed—not least by the surprise attack of the MacLaren clan. How much will Ross surrender to guarantee Aoife’s safety? And how much will Aoife give to protect the man who has captured her heart?

You can read an excerpt right here.